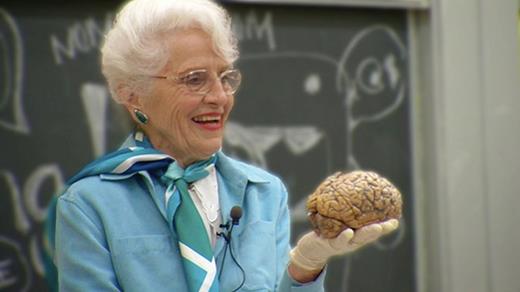 Move back historically to the formal birth and popularization of Rowe and Kahn’s paradigm for successful aging (Rowe & Kahn, 1998). Move back still farther to the 1970 and 1980 decades where gestational studies show how environmental experiences and lifestyle account for physical and psychological changes once thought due solely to primary aging (e.g., Rodin & Langer, 1977; Schaie & Willis, 1986). Clearly, “successful aging” and its sibs—productive aging, positive aging, and optimal aging—have a rich vertical lineage spanning several generations of researchers. But who were the progenitors of this outlook? Who spawned this type of thinking? I believe a strong argument can be made that the original intellectual “Mitochondrial Eve” of our current positive paradigm is 88-year-old Dr. Marian Cleeves Diamond, professor of neuroanatomy at the University of California, Berkeley.

My Love Affair with the Brain: The Life and Science of Dr. Marian Diamond is a six-episode production that can be accessed currently at no cost on the Luna Productions website (http://lunaproductions.com/marian-diamond/). The episodes vary in length from 6 to 15min. Award-winning videographers Catherine Ryan and Gary Weimberg succeed marvelously in their goal “to explore the achievements of Dr. Marian Diamond’s life and her science.” Though not explicitly intended to focus on the successful aging paradigm, the production shares her contributions to the brain science that informed it. In addition, it reveals her remarkable personal qualities—qualities that distinguish her as a passionate scientist, colleague, educator, mentor, and—foremost—as an open, authentic human being who now personally models successful aging.