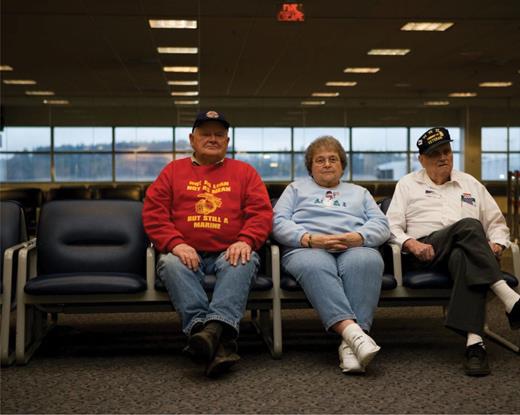 The Way We Get By offers an intimate glimpse into the lives of three elderly Maine Troop Greeters at the Bangor Airport. Because of its eastern-most location, the Bangor Airport has served as the major departure and arrival point of more than a million U.S. troops involved in the Iraqi and Afghanistan theaters of war. The Troop Greeters, largely older adults, have welcomed every flight of soldiers, 24hr a day, year-in and year-out, since 2003. Despite sharing a common commitment to their role as greeters, these three individuals are rather different from one another.

Joan Gaudet is the 75-year-old mother of videographer Aron Gaudet. Troop-greeting activity now exists alongside her involvement with her eight grandchildren. Because flights arrive around the clock, much of her activity occurs at night while her family is sleeping. She deals with her fear of the dark and the challenges that her failing knees pose for her walker. She explains that “You get addicted to it; you can’t give it up.” However, she greets only those who are arriving, as she is too saddened to see off the soldiers who are leaving. She lives 24 miles from the airport.