Cinematic Vertigo – And Enjoyable Once You Relax into It 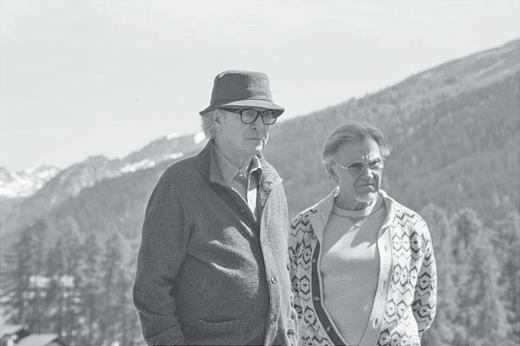 Early in this film, a remark from one of its characters laments the fact that he has become known as an actor mostly for playing the role of a robot in one particular film. This remark turns out to be a reflection of the very nature of the film, Youth. Throughout much of its 2 hours, the film feels like it could have been made by a robot. The story line moves along in fits and starts, and the characters often speak their lines with an isolated demeanor rather than truly engaging with each other. Approached in the right way, however, the film can still be a pleasure to watch.

Youth is, in part, about two older artists at a vacation retreat in the Alps. Mick Boyle (Harvey Keitel) is an older film director aspiring to make his outgoing masterpiece—in his words, “a testament” film, titled Life’s Last Days. Accompanying him at the retreat is a team of younger script writers working with him to find the right ending to the film. His longtime friend, Fred Ballinger (Michael Caine), a music composer, is also at the retreat. Fred recognizes and accepts that his life’s work is finished, and he seems content to just “be.” Accompanying him is his daughter, Lena (Rachel Weisz), who also seems to serve as his part time manager, fielding ongoing requests related to his long musical career. She regards her father’s contentment as “apathetic.” Fred also has a wife whom he apparently has not seen, according to his disgruntled daughter, for several years. (Toward the end of the film we accompany him as he visits her in a care facility where she lives in a catatonic state.)


All Film Reviews,Attitudes about Aging Reviews,Elderhood as a Part of Life,The Aging Process