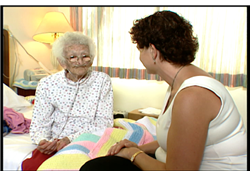 He Wouldn’t Turn Me Loose: The Sexual Assault Case of 96-Year-Old Miss Mary

This DVD presents the real-life case of 96-year-old Miss Mary, who was financially exploited and later, sexually assaulted by her grandson. Miss Mary had been living with her grandson and his wife for five years during which financial abuse took place. Then, one evening, when his wife was out, the grandson sexually abused Miss Mary for several hours, leaving her bruised from head to toe.

After the attack and hospitalization, Miss Mary was placed in a nursing home under the name “Jane Doe” for safety reasons. Miss Mary’s family refused to believe her and refused to support her; her primary social interactions were with staff and residents of the nursing home, and the advocates she met after the assault. However, Miss Mary retained her strength of character, and fully participated in the subsequent trial and prosecution of her grandson.

Through interviews with Miss Mary, various professionals involved in investigating and trying the case, and with victim advocates who helped Miss Mary, the DVD reveals some of the dynamics involved in this case, and how it was successfully brought to trial and prosecution.